In a world where emotional intelligence is critical for lifelong happiness, successful careers, and healthier relationships, social-emotional learning (SEL) is the process through which children and adults can better understand, manage, and express emotions and empathy, develop positive relationships, and make responsible decisions. SEL curricula teach children techniques that help them gain confidence, set and achieve positive goals, collaborate well, and navigate the world more effectively—adding a highly valuable dimension to education in the classroom.

What Is Second Step?

It’s a difference you can feel the moment you step through the doors to a Second Step school: a sense of safety and respect grounded in the social-emotional health and well-being of the entire school community.

Second Step is a program rooted in social-emotional learning (SEL) that helps transform schools into supportive, successful learning environments uniquely equipped to encourage children to thrive. More than just a classroom curriculum, Second Step’s holistic approach helps create a more empathetic society by providing education professionals, families, and the larger community with tools to enable them to take an active role in the social-emotional growth and safety of today’s children.

Self-awareness: The ability to accurately recognize one’s emotions and thoughts and their influence on behavior. This includes accurately assessing one’s strengths and limitations and possessing a well-grounded sense of confidence and optimism.

Self-management: The ability to regulate one’s emotions, thoughts, and behaviors effectively in different situations. This includes managing stress, controlling impulses, motivating oneself, and setting and working toward achieving personal and academic goals.

Social awareness: The ability to take the perspective of and empathize with others from diverse backgrounds and cultures, to understand social and ethical norms for behavior, and to recognize family, school, and community resources and supports.

Responsible decision-making: The ability to make constructive and respectful choices about personal behavior and social interactions based on consideration of ethical standards, safety concerns, social norms, the realistic evaluation of consequences of various actions, and the well-being of self and others. 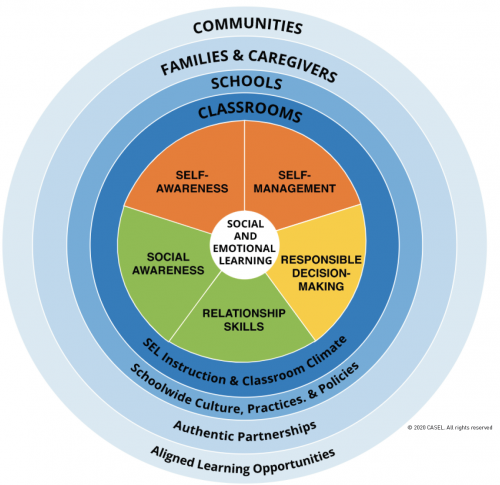 More than two decades of research shows that SEL leads to:

According to a 2011 meta-analysis of 213 studies involving more than 270,000 students, those who participated in evidence-based SEL programs showed an 11% point gain in academic achievement.

A review of six SEL interventions in evidence-based SEL programs showed that for every dollar invested there was an economic return of 11 dollars.